‘Samaritans’ is a registered charity aimed at providing emotional support to anyone in emotional distress, struggling to cope, or at risk of suicide throughout the United Kingdom and Ireland, often through their telephone helpline. Leo and Gil from the Haverfordwest branch gave us an informative talk about the wonderful and important work that they do.

Samaritans began in 1953 in London, founded by a vicar called Chad Varah.  Throughout his career Chad had offered counselling to his parishioners, and wanted to do something more specific to help people struggling to cope and possibly contemplating suicide.

The initial idea for Samaritans came from the first funeral Chad conducted early on in his career: a girl aged 14 had started her period, but having no one to talk to believed that she had a sexually transmitted disease and took her own life.

Chad was immensely moved by this senseless loss of life, “I might have dedicated myself to suicide prevention then and there, providing a network of people you could ‘ask’ about anything, however embarrassing, but I didn’t come to that until later”.

When Chad was offered charge of the parish of St Stephen in the summer of 1953 he knew that the time was right for him to launch what he called a “999 for the suicidal”. He was, in his own words, “a man willing to listen, with a base and an emergency telephone”.

The first call to the new service was made on 2nd November 1953 and this date is recognised as Samaritans’ official birthday.

Chad knew he would need to get word out about the service. Luckily he wrote and illustrated articles for children’s comics, so he knew many of the journalists who worked on national newspapers. The service received lots of press coverage and on December 7th, 1953 the Daily Mirror coined the term “Telephone Good Samaritans” and although Samaritans is not a religious organisation, the name has stuck and become synonymous with the idea of people being there for others struggling to cope.

The newspaper coverage worked and Chad received many callers wanting support both on the phone and face to face, as well as people wanting to help as volunteers. Initially the volunteers’ duties were to sit with the callers whilst they waited for their appointment, offering them someone to chat to, but it soon became clear that their role was much more central to the service. Often, the callers would pour out their problems to volunteers and many felt no need to speak to Chad afterwards.

The simple act of listening and offering non-judgmental support was enough for most callers, and Chad realised the power of the service was in providing a safe space so people could talk and be listened to, without judgment.

Publicity for the London-based service created a lot of interest elsewhere in the UK and as a consequence several more Samaritans centres were set up in the following years – the second being Samaritans in Edinburgh which took its first call on 1st June 1959. There are now 201 branches across the UK and Republic of Ireland.

In February 1954, Chad officially handed over the task of supporting the callers to the volunteers, and Samaritans as we know it today was born. Samaritans service today still operates on Chad’s guiding principles of confidential, non-judgmental support. 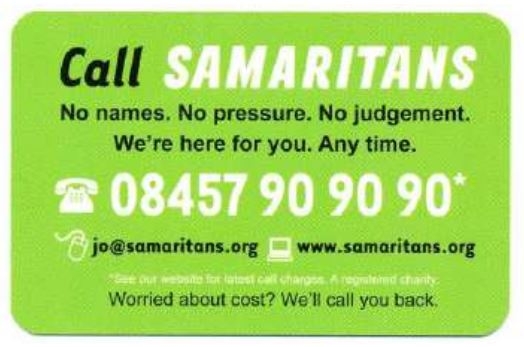