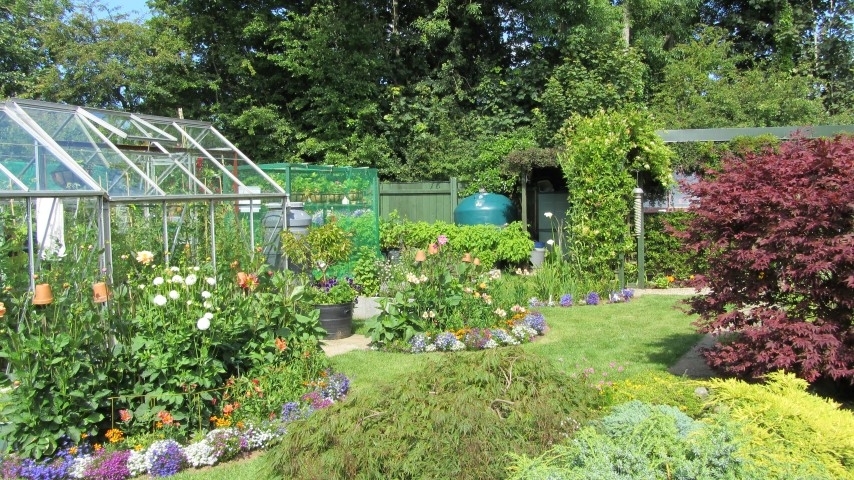 Our meeting this month took place in Johnston at the garden of Stan and Pam Steer, and what a garden it is.  We entered at the front to a large lawn area with herbaceous borders which are enclosed with low box hedging that would not look out of place at a Stately home Pam explained she cuts these with an electric hedge cutter.  Neatly placed behind the plants on walls and fences are labels advising as to the plant name and variety how sensible, how often we add another specimen to our garden and then completely forget its’ name.  In the corner is a large seated area beneath a pergola over which grows a grapevine, clematis Montana and a Kiwi fruit that should bear fruit judging by the number of flowers, is there no end to the group’s talents bougainvillea and now Kiwi fruit!  I sensed the group, as we drank our most welcome beverages tea and coffee, were thinking well this is a nice garden then we were led, through a gate, to a fabulous garden it is no exaggeration to say we were amazed.

Immediately behind the bungalow is a pond which, as if by  magic, has a stream running into it, my word Stan is a clever fellow, with some of the largest fish I have ever seen, one would have fed a family for a week should fish be on their menu.  Adjacent to the pond stands a beautiful Acer palmatum, we learnt it is possible to trim this shrub to keep its shape.  Moving on we began to enter the business part of the garden, raised vegetable beds, beds of soft fruit enclosed with fine mesh to deter invaders together with hanging baskets not full of flowers and trailing plants but strawberries!  This is the first time the group has found his and her greenhouses and sheds.  Without wishing to appear sexist it was easy to recognise Pam’s end of the greenhouse, and it should be pointed out there are two greenhouses end to end cleverly raised on blocks to give plenty of headroom and growing space, Stan’s end is full of tomatoes, his first attempt, so all the best Stan.  I noticed in his part of the greenhouse produce being grown possibly for showing purposes I will say no more you will have to come to the Horticultural Show to find out.  I won’t dwell on the shed situation I think we ladies know we are usually the most tidy!  Although, as mentioned this area of the garden grows for eating it is also interspersed with pretty flower beds with vibrant blue lobelia and French Marigolds and here and there heavenly scented sweet peas in various shades of pinks and purples also the tallest borage plant I have ever seen possible four feet in height as opposed to mine which manage eighteen inches. 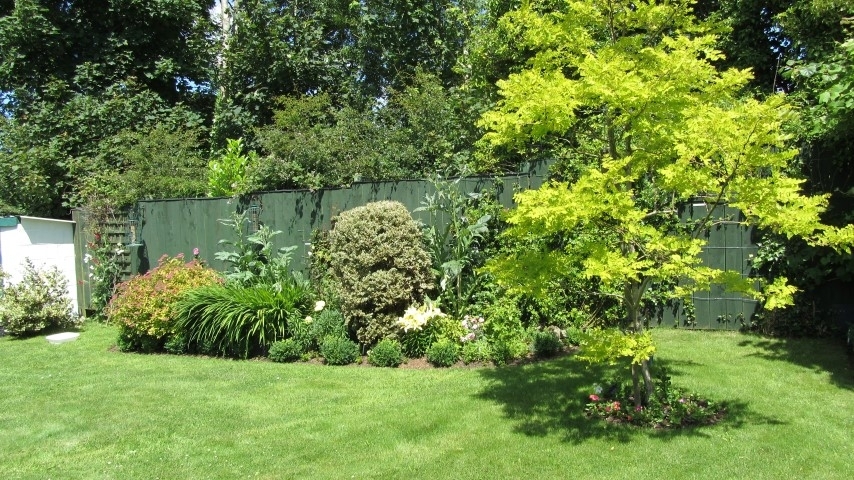 This is an extremely verdant garden, Pam’s secret ingredient as well as hard work Chicken Manure pellets or as she described it  “Chicken poo” from Wilkinson’s, I don’t think their stock will last long.

I must say I never cease to be amazed at the achievements of our members, this garden, ten years ago, was just a field, the soil structure is clay but what has been achieved by Stan and Pam is outstanding, the sun shone upon us (back to normal for the gardening group) and a most pleasurable afternoon was spent in a garden which unbelievably is sandwiched between a busy road and the railway.