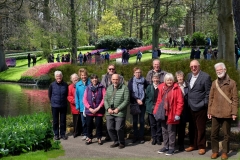 The day of the Show finally arrived and as the doors opened there was much trepidation as to whether we would have any exhibits because each time I came across a member of the Gardening Group the topic of conversation was, “it’s been a difficult growing season” followed by “doubt I’ll have anything to show”.  However, by 10.30 the tables in the hall were laden, in fact, it became necessary to move exhibits to make room, thank goodness there were no carrots or cucumbers! The total number of exhibits this year was 172 of which 141 were vegetables and flowers and the remainder jams and preserves together with a new class for a Victoria Sandwich top marks to the gentleman who placed his cake on the table with “U3A” stencilled in icing sugar across the top, very impressive although not a winner!  The hall looked beautiful bursting with colourful flowers and a variety of vegetables, take a look on website.  The Judges were impressed by the quality of all the exhibits.

The results were as follows:

There was a steady flow of visitors during the afternoon who were suitably impressed by the exhibits and whilst enjoying a cup of tea and a biscuit one or two were heard to say “I shall have a go next year” I sincerely hope they do, the Show is open to all U3A members it is a really fun day although somewhat nerve wracking.

EDIT:   Please note an additional class has been added to Section 2 Flowers  45: Gladioli (3)

The Annual U3A Horticultural Show will be held on Saturday, 6th August 2016, at 2 p.m. at Neyland Athletic Centre.

Double-click on this to see the Show Schedule.  2016 Schedule.

Unlike in previous years, we would like you to fill an an entry form.  This helps the organisers to allocate sufficient space on the tables.

Double-click on this to see the Entry Form.  2016 Entry Form

The Entry form should be returned on or before the Tuesday before the Show.  Send it by e-mail to davidpinch5213@btinternet.com, or by post  to David Pinch, 18 Hayston Avenue, Milford Haven, SA73 3EB.

Entries will be accepted not on the form, as long as it is clear how many exhibits for which Class that you are entering.