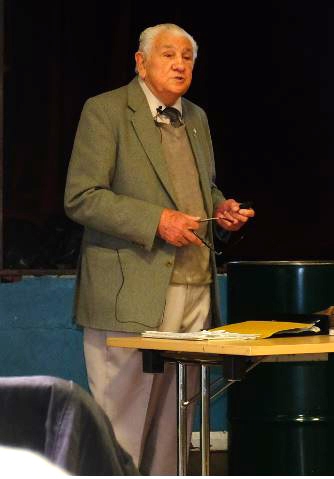 The speaker was Frank Harries BEM whose talk was entitled “Through the years, a full life” and what a full life he led.  His father began his working life as a wheelwright in Pembroke Dock. He subsequently joining the army and taking his family to Gibraltar. Whilst on holiday in the Spanish City of Seville the Spanish Civil War broke out and Frank watched as bombs fell from the sky finding the experience exciting, but not realising how many people were being maimed and killed. Frank showed photographs of his family, Ration Books and Identity Cards issued at the beginning of the Second World War.  Living in Pembroke Dock at this time he became an Altar boy and remembered the American Soldiers billeted in the area.  Joining the army at the age of 18 Frank found himself in the Malayan Jungle searching out communists.  It appears our hero was something of a footballer and played as goal keeper for Llanelli but in the days when footballers had a “day job” this proved too much for him.  In his later days Frank became a referee and in retirement he joined the Rotary and became something of a fundraiser in fact he raised the staggering sum of £200,000.00.  Indeed a very full life and still going at the ripe age of 90 it could make one’s own life seem somewhat dull!