What a different monthly meeting took place today.  No speaker, but members from La Volta, a group of musicians who entertained us with their medieval musical instruments.  Namely, a viol, fiddler, shawn, cittern, crumhorn and various sized recorders to name but a few. 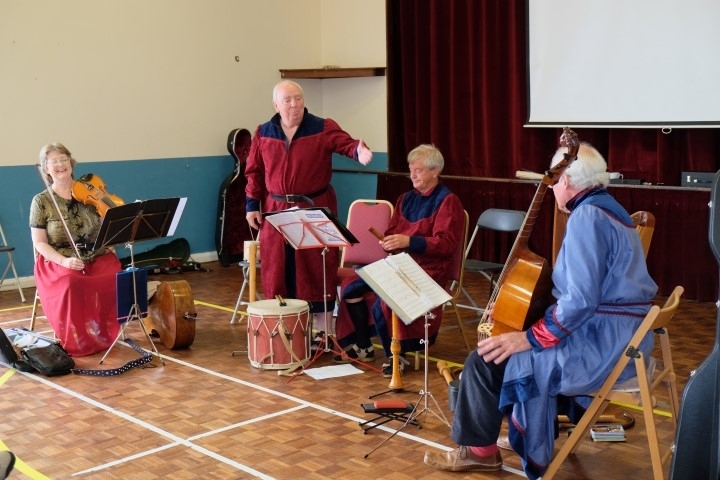 Marion, Tom, Lyn and Basil transported us, through their music, to the Court of King Henry VIII playing a piece of music he composed.  My word how far the world of music has come since those days!  Each piece of music was announced but “The Teddy Bear’s Picnic” needed no such introduction.  Some of the lady members were amused by the words of a song which instructed a lass as to how she could dispose of her unwanted husband.  Firstly by giving him boiled marrow bones, for which purpose she purchased sixty.   The effect of which would be to render him blind thus enabling her to carry on with potential husband No 2.  However, the scheme failed when, on a walk along the river bank, she fell in.  Her cries for help were met with a response from her husband advising her he was blind and couldn’t see to assist her, not such a good scheme.  What lyrics they devised in medieval times.  There was some audience participation when we were required to mimic the sounds of a hen, cockerel, duck, and lamb which we did with gusto.  But I don’t think we should rush to audition for Britain’s Got Talent. The Meeting was quite a departure from the usual format but certainly well received by those in attendance.

La Volta will performing next at Manorbier Castle on 28th July.