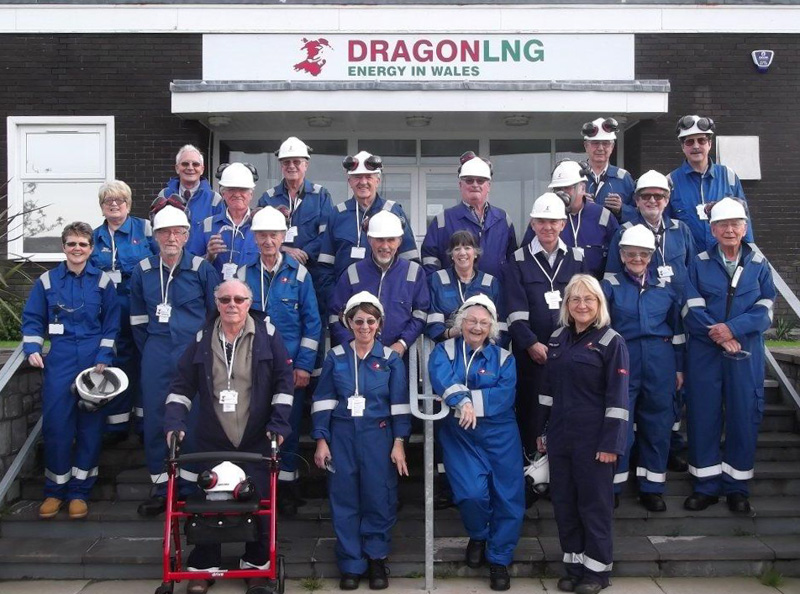 Members of the Computer Group and other U3A members enjoyed a very informative
and interesting afternoon visit to Dragon LNG. Our special thanks to Wendy
Goldsworthy (front right) and Karen Wood (second row left) who escorted us for
the afternoon and answered all our questions.

A brief précisof the techy stuff!

Natural gas (mainly methane), from
sources around the world, is cleaned of impurities and then cooled to below
-160ºC when it is stored as a liquid and
transported by ship in insulated containers (like giant Thermos flasks) to
Milford Haven. The liquid is then pumped and stored in 2 large containers until
required by the national grid. Heating returns it to a gas, it is then further
refined for consistency with the national grid requirements and finally released
into the large pipelines connecting to the rest of the UK network.

Refrigeration is not used at any point after
the original cooling and liquefaction; the liquid gas remains below -160ºC by
excellent insulation and the cooling effect of boil-off gas which is removed and
used for heating and electricity generation on site. Liquid gas occupies around
1/600th of the volume of the gaseous form which facilitates the economic
transport around the world.

During the visit we also learned more about the finite and dwindling natural energy resources in the world competing with
an ever increasing population and the added expectations and energy demands in the
developing nations.

Further information is available from the Dragon LNG site at

http://www.dragonlng.co.uk and also
a video about their community support programme is at
http://youtu.be/oEfR2OaoRco

The death occurred on Tuesday 17th September of John Young (97), former and
first Treasurer of Pembrokeshire U3A. The funeral will take place on Monday 30th
September with a service at St Ismael’s Church, Uzmaston at 12.30pm followed by
cremation at Parc Gwyn Crematorium Narberth.

Thank you Debbie and Martin

Annual Art Exhibition at the Carew Community Hall Started at 20th
August and continued till the 26th August,
including August Bank Holiday Monday.

(CICK ON THE THUMBNAILS BELOW
TO VIEW PICTURE. CLICK ON “BACK” TO RETURN)

If any members are interested in
being involved in introducing children to the fascinating world
of stamps they can contact her on 01646-601490 or email
erenegrieve@f2s.com
“

Top Award in the world of ballroom dancing
for Gwen Thomas 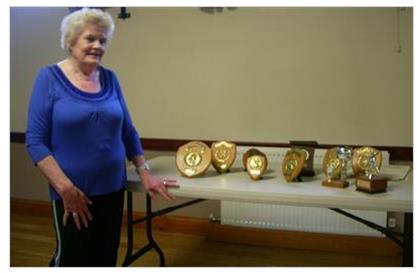 Congratulations to Gwen Thomas, who, at the age of 84, has
achieved the top award in the world of ballroom dancing. On 19th
June she achieved the Golden Scroll which was awarded by Ann
Phillips Hylde, Examiner of the International Dance Teachers
Association. Gwen started dance classes at the age of eleven and
has won many cups and shields for excellence in ballroom dancing
during her lifetime. She continues to take weekly classes,
travelling from Haverfordwest to Carmarthen by bus. Gwen is a
member of Pembrokeshire U3A and also attends weekly Exercise to
Music classes at Merlin’s Bridge Welfare Hall. 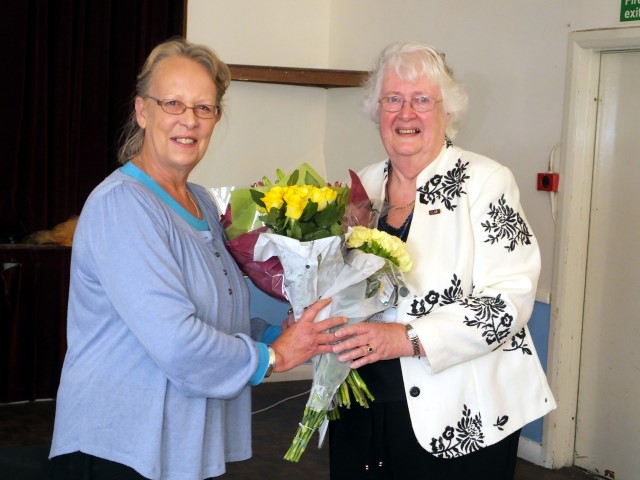 Debbie receives a bouquet of flowers from
Jean Goodeve on behalf of the membership at our recent Monthly
Meeting. Debbie and Martin are retiring after many
years acting as our hosts at the Neyland Athletics Club.

South Wales
and Severn – side Network of U3As

10.30 am:
Welcome and Introduction 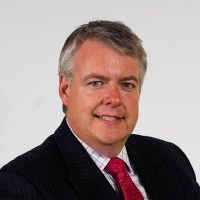 A member of Amnesty International and the Fabian Society and a
fluent Welsh speaker, Carwyn Jones was a successful barrister
and a tutor at Cardiff University before he was elected as a
Member of the Welsh Assembly Government. He is now the First
Minister of Wales and a member of the Privy Council. He will
tell us about his early life, why he set aside his previous
successful career to enter politics, his responsibilities as
First Minister, the pleasures and challenges of his work and his
hopes and aspirations for Wales. 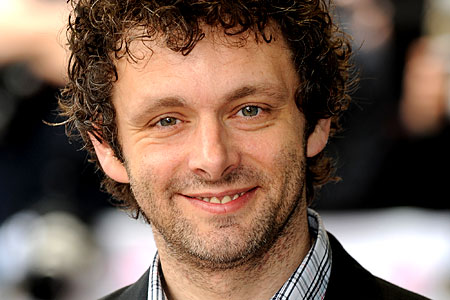 Brought up in Port Talbot, Michael Sheen enjoys a hugely
successful career in the theatre and in films. His many
acclaimed roles include portrayals of Tony Blair, David Frost
and Kenneth Williams and for these and other outstanding
performances he has received many prestigious awards. Michael is
currently working in Hollywood but Meyrick, his father and
himself an actor and impersonator, has kindly agreed to be with
us to tell us about Michael’s early life and his decision to
make acting his career even though he had the opportunity to
choose a totally different but equally prestigious career path.

Professor Chris Williams is a leading academic, a prolific
author and the editor of the recently published Richard Burton
Diaries. The diaries give new and fascinating insights into the
character and thoughts of this celebrated actor – his
insecurity, his frustrations, his demons, his work, his
aspirations, his opinions about himself and others – and so much
more. Professor Williams will highlight for us many of these
revelations and help us create a new and authentic portrait of
Burton.

On the 22nd of March we hosted the annual match against Llanelli U3A. We had a really friendly game followed by an excellent lunch at Greens Restaurant at Milford Haven Golf Club. The final score was Pembs. U3A. 27 Llanelli U3A 26. So we hold the shield this year.

Betty Greeenhalgh (Membership no 7) one of the founder members
of Pembrokeshire U3A died recently. Some of the longer standing
members and those who attended the Music Group that Betty and
Roland ran in the early days, may wish to attend her funeral.
It is being held in St Madoc’s Church at Nolton at 2.00 pm on
Thursday 7th March.

The Church is in the village of Nolton.
Travel along A487 from Haverfordwest to Simpson Cross, turn lst left to Nolton Cross, 2 miles, turn right to Nolton village. Church on right at end of village.

Just a note to give you early warning of the Brecon U3A Rosemary
Maling Lecture Day which this year will be held at Theatr
Brycheiniog, Brecon on Thursday 10th OCTOBER from 10.30am –
3.30pm with the usual buffet lunch. The topic this year is
Language & Linguistics and we are delighted to have engaged two
eminent speakers in Professor David Crystal – University of
Bangor. His many academic interests include English language
learning and teaching, clinical linguistics, forensic
linguistics, language death, “ludic linguistics” English style,
Shakespeare, indexing, and lexicography. He has published widely
and is a regular popular contributor at the Hay Literature
Festival AND Merered Hopwood – poet and writer, the first woman
ever to win a Bardic Chair at the National Eisteddfod, and a TV
presenter for S4C. A formal invitation to your members will be
sent out during the Summer but we thought it might be useful to
let you have early notice.

Gloria Droy would like to express her thanks to those members of
her Exercise to Music Class who arrived at Merlin’s Bridge
Welfare Hall early this morning to record a video, which will be
shown at the Senedd this month. It was a very wet and miserable
morning, but everyone arrived on time and cheerfully went
through the routines.
So, many thanks for giving your time and effort:
Penny Thomas, Margaret
Howlett, Mary Morris, Carol Matthews, Mary George, Valerie
Swales, Cynthia Wright, Trisha Biffen, Rachel Harvey, Kimie
Atkins and Patsy Goodman.
It should be noted that the average age of
these class members is 70
years! And an especially big thank you to our cameraman, Mike
Green (who says he’s older than all of us, but we don’t believe
it)! Mike now has
the task of editing and producing the video, ensuring we all
look our very best.
Thank you, Mike!

Appeal for stories for BBC series on Wales in the 1960s

Testimony Films is producing a new four part series
for BBC1 Wales on life in Wales during the 1960s. We’re
keen on speaking to people who lived in Wales in the 1960s and
have experiences and stories to share.

The four part series will explore the dramatic changes that took
place in Wales in the 1960s to transport, education, industry
and the effect of the sexual and social revolution.

Do you have a story about the education system in
Wales in the 1960s?

Did you pass or fail your eleven plus? Perhaps you attended one
of the early comprehensives in Wales, or perhaps the grammar
school you started at changed over to a comprehensive.
Were you teaching in Wales at that time and have a story to tell
about the dramatic overhaul of the education system.

Do you have a story about the transport revolution in Wales?
Perhaps you passed your driving test in the 1960s and remember
the feeling of freedom that owning a car had on you and your
family. Do you remember the opening of the Severn Bridge
and the M4, and the closure of many railway lines in Wales?

Do you remember the sexual revolution in Wales, and if so, how
did it affect you? Were you a rebel teenager who defied
your traditional upbringing? Do you have a story about the taboo
of sex before marriage? Do you remember watching the Beatles
play in Rhyl in 1962, or remember travelling to Liverpool to go
the Cavern Club? Or did you live in one of the first
communes in Wales?

Do you have a story about working in industry in the 1960s?
Perhaps you remember the new opportunities that were opening up
for women in the work place? Did you work down the mines, the
Steel works or in a factory? Were you affected by the many
cuts to industry during the 1960s? Or perhaps you have a story
about the Aberfan disaster.

If you or someone you know have memories of life in Wales in the
1960s or would like more information on the series, please
contact Emily Sivyer on 0117 925 8589,emily.sivyer@testimonyfilms.com or at Testimony Films, 12 Great George
Street, Bristol, BS1 5RH. 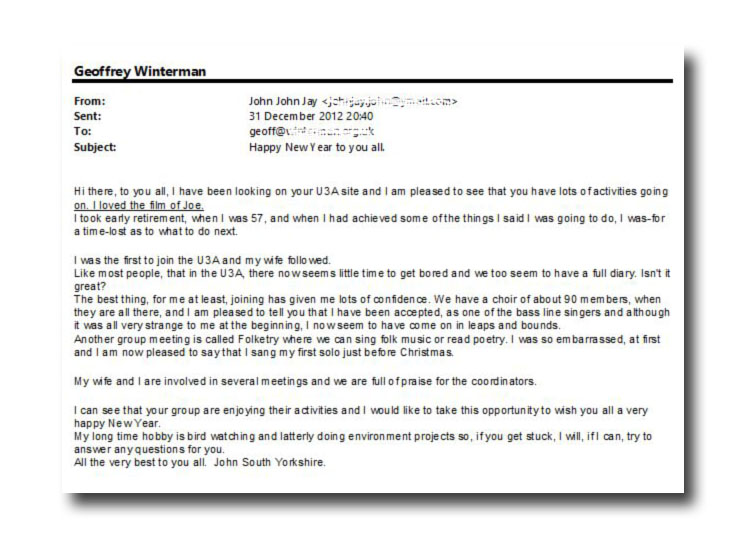 The purpose of this U3A Day is to inform
Assembly Members, representatives of local authorities, colleges
and others concerned with the education and well-being of older
people about the importance of the work of U3As and to gain
their encouragement and active support in sustaining existing
U3As and establishing new ones. Over 20 U3As have offered
contributions to the Day which will consist of static displays,
exhibitions of work, demonstrations of work being created,
screening of DVDs and performances of music, drama, sketches and
exercise.

As part of Pembrokeshire U3A’s contribution, nine brave members
of our Exercise to Music Class at Merlin’s Bridge Welfare Hall
agreed to be videoed to show Assembly Members how exercise to
music helps them to keep fit.

Our Pembrokeshire video is produced by Mike Green, who came to
video the class members on 5th December. He then edited the
work, to show only ‘the best bits’, as some class members became
rather nervous in front of the camera, and made mistakes

in some routines, which they would normally perform without any
problems! 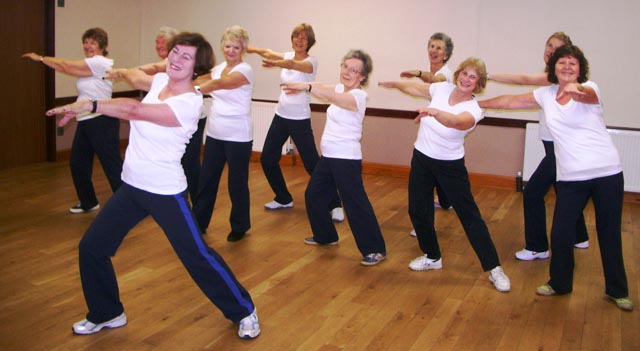 Photo: From left to right:

Back to Top of Page